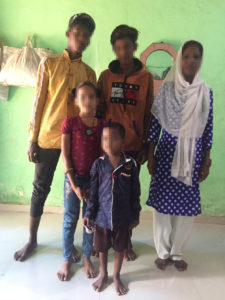 Losing a life partner at any age is heartbreaking. For those who are widowed while still young, it is simply devastating. RDF is here to walk alongside Sayara on her grief journey as she widowed recently. She is a rag picker and recently lost her husband. She has five children of 17 to 6 year of age.

Husband Sayed an alcoholic was in and out of hospital for quite some time. He passed away in the month of October due to cardiac arrest and kidney failure as he did not heed to doctor’s advice. His wife Sayra took good care of him during his illness and was shattered and disheartened that her husband wouldn’t stop drinking; all her efforts were in vain. He was admitted in hospital at Silvasa but this time he couldn’t make it and passed away on 16th October.

Six year old Sofiya and her four year old brother Arhaan were terrorized, tortured, and sexually assaulted in a shed close to their home by their fathers’ friends in 2017. The accused kidnapped both the children while their family was asleep. Police suspected the father’s friends but since there was no proof, they were let off after few days of investigation. The violent brutal attack and abuse left both children terrified and shattered. They were treated for a month in a hospital in Mumbai on government expense.

Our team visited the family and discussed with them the present situation. Two elder children (18 and 17) have stopped going to school but rest three are continuing their education.  We encouraged their two elder children to start looking for part time employment and continue their studies through NIOS.  Sofiya is studying in 3rd standard and likely to move to nearby Government Marathi medium school from Urdu medium school. Her education has been affected due to parents moving from one place to another. Boy Arhaan is turning six and doing well in his aganwadi (pre-primary) and will go to now to 1st standard in main Marathi government school.

We give them monthly groceries and will continue whatever best possible support we can provide with our minimum resources. Support for Sofiya and Arhaan’s education and well being will be our main focus in the years to come.

Names changed to protect their identity for safety reason

JOIN HANDS WITH US